Some of Crows favourite records 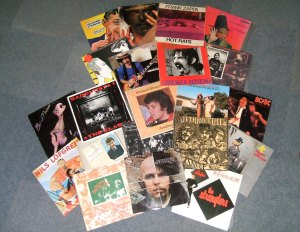 Surfers have been into music since the start of surfing, in the beginning surf music was a bit corny but always fun.

1968, a typical surf on a summer Saturday morning at Redhead, the flags were up already but no one was in the water yet (hard to imagine these days). Two young long haired surfers sneak into the surf club (it’s ok they were members but they were sneaking). They set up a portable tape player in front of the PA mike, switch on the PA and the tape player and then grab their boards and paddle out fast.

The lag on the tape leader allows them to get out and then we hear the crackling and over the air waves comes Jimi Hendrix – Third Stone from the Sun. The music sort of rumbles and growls then squeals and sets into an awsome  rythm. We take off and surf a wave to the new sound. Hendrix growls, You will never hear surf music again. Soon enough the funbusters discover what’s happened and the music is switched off.

Jimi Hendrix – Are you experienced – the first record that hit me, the times were changing and this was a big change, no soppy verses and structured choruses – just whatever Jimi felt like. Other Hendrix favoutites are Axis Bold as Love and Band of Gypsys.

A couple of years later a work mate loans me the 3 first Mothers of Invention albums, I listen, hear some weird stuff but some good stuff. In 1970 I go and buy the album Frank Zappa – Hot Rats and now have another favourite guitar player. Captain Beefeart’s growling vocals and Zappa’s Wah-Wah together on Willie the Pimp, awsome. Zappa has some 60 albums out and there is something incredible in all of them. My favourite now is Joe’s Garage, the song Watermelon in Easter Hay is Joe’s last imaginery guitar solo before music is made illegal. However Zappa’s a little bizzare for most people and I am sure I couldn’t paddle out with him playing on the PA, so I have to imagine it too.

Captain Beefheart was Zappa’s school mate and then formed his own band Captain Beefheart & the Magic band, his first album Safe As Milk has a young Ry Cooder on slide guitar, favourite song Sure’Nuff and Yes I Do. Other notable Beefheart albums are Trout Mask Replica, Clear Spot and Doc at The Radar Station. Growling blues boogie and meshing electric guitars. Not for the faint hearted.

Dr John, The Night Tripper – New Orleans Voodoo Swamp Funk, the album Gris-Gris is scarily awsome. The good doctor has appeared on most big names albums as a session pianist and has many fine albums.

After a re-listen I am back into the Gratefull Dead, the hippy tie-die head band. Listen to American Beauty the song Ripple is beautiful.

After James Brown (try – its too funky in here) came Funkadelic/Parliament – the same band but just add more players. For fun, some great funky rythm’s and guitar and Zappaesque humour leader George Clinton (Brother Bill) is the new hip hop guys hero. Try Parliament Tear the Roof off – which inspired Talking heads Burning down the House after watching them. Also try Funkadelic Music for your Mother and Standing on the Verge of Getting it on.

Took me a long time but I did it and never looked back.- Listen to Miles Davis best intro is the album In a Silent Way.

Jimi Hendrix and Frank Zappa had the same guitar hero – Johnny Guitar Watson, try Funk beyond the call of Duty or his 1959 song – 3 hours past midnight.