Surfboards with channels on the bottom (just one channel and more of a concave) were probably first made in the 1950’s by Bob Simmons and Dale Velvy and then again in the 1960’s by Greg Noll, but they first became popluar after Redhead’s Col Smith rode them in Hawaii in 1977. The idea was they moved the water out the back of the board faster and also gave more control with the extra edges.

The first modern channel bottom boards were designed and made by Jim Pollard for Shane Surfboards in 1976. Jim had Newcastle boys Col Smith and Steve Butterworth riding quivers of his rounded 6 channel boards, the first lot Col used at Bells beach with some success.

Col Smith then took a quiver of Jim Pollard’s boards to Hawaii in 1977 and impressed the world with his surfing on them and then they became popular. 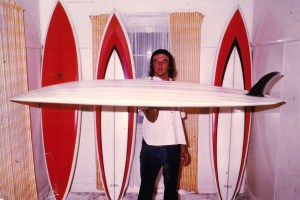 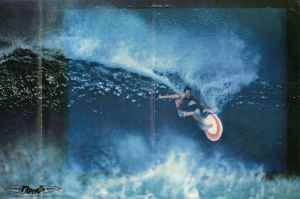 Col returned from Hawaii and started working at Redhead with Martin Littlewood now Delta Designs Margaret River and started making boards with 6 channels with harder edges, Martin’s idea was from the Clinker Hulls of wooden boats and how stable they were in the water. Col then worked for a few other manufacturers such as Sam Egan and Free Flight’s Phil Myers and also shaped boards himself at his home.

Col Smith in his shaping bay at Redhead 1979

A Martin Littlewood Delta Designs 6 channel around 1981. Note the outside channels are longer

Lots of other shapers then were making boards with channels, notably Alan Bryne who spent a lot of time surfing with Col Smith. Around 1984 Col visited Martin Littlewood in Margaret River and they designed asymetric channel boards based on the windsurfers Martin was making. 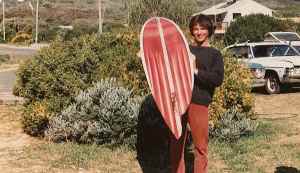 Also noteworthy that around the early 1970’s the Campbell brothers introduced double concaves with three fins on their Bonzer model, the outside fins being a shallow wide base keel design which helped channel water out the back. Around 1981 Simon Anderson developed the Tri fin using 3 fins of similar size. SInce then most boards made have 3 fins and double concaves, but some guys still ride the channel bottom designs.