The first Stand Up Paddler?

The following article appeared in Surfer Magazine in January 1988, words and photo by Robert Beck. The photo shows Bob Ah Choy at Waikiki standing up using a paddle taking photos of tourists surfing. The article states Bob has been doing it for 2 years and took over from his brother Leonard who did it for 10 years, probably making the him the first  SUP rider starting around 1976. 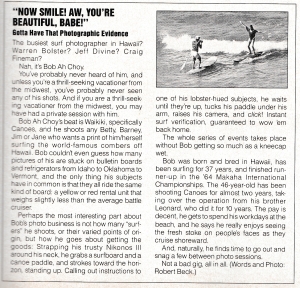 Sam on SUP Black Neds Bay Swansea 4/1/2017 swapped his rod for a paddle for a change.

The shark sighting arial drone trial at Redhead Beach has proved helpfull today and hopefully will save lives. I was out in the surf at 08:30 Tuesday 20/12/2016 when I saw a 3 metre shark just a few metres away, just behind the break about a 100 metres out from the Shark Tower. Lucky I was up on my SUP and could see the dark shape lurking below nearby and I dont think I would have seen it sitting on a surfboard. I started to paddle in and alerted the only other nearby surfer and we paddled in together. The government funded drone trial had just started for the day and one of the operators was running down to the waters edge to alert us. They also had just sighted the shark. The Drone operators then put an alert on their shark phone app and when the Life guards arrived soon after to start work they were already aware and immediatley launched the jet ski to search for the shark. Hopefully the drone can operate longer hours and alert people in the water with a siren if the Lifesavers are not present.

Photo taken from Drone as in Newcastle Herald 22/12/16 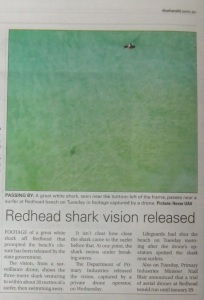