Late November 2010 Redhead Little Beach is starting to get some sand out the  back again with the constant North Easters we have been getting. 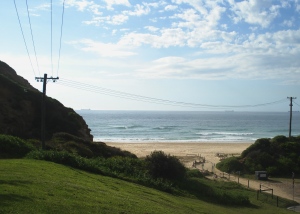 Graham Parker & the Rumour at Newcastle Civic Theatre 1978.  England’s Graham Parker produced some great R&B music with biting lyrics and  had a great band. Here he lifts the obligatory shades and sings “Hey Lord, don’t  ask me questions, cause there aint no answer in me”

Sandy on a windy day at Redhead Beach 1984

Redhead Surf Club Members after the annual general meeting around  1977.

Redhead Lambton B Colliery shut down and on the way out around 1980.  This coal mine was the financial backbone for Redhead during it’s many  years in operation.

Redhead Lambton B Colliery closed around 1980